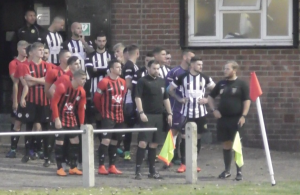 Max Cowburn scored a first-half brace as Whickham thrashed Silksworth CW 5-0 to progress through to the next round of the Durham Challenge Cup.

Cowburn opened the scoring inside the first 18 minutes of the game and added another shortly after, doubling the Lang Jacks’ advantage.

Dale Burrell and Scott Robson put the game out of sight for the visitors with goals towards the back end of the first-half.

Whickham continued to control the game and rounded off their fine performance with a late goal from Lee McAndrew and now they await the draw for the First Round of the competition.

Robin Falcus’ side have had a seven-day break and come into the game off the back of a victory over Bishop Auckland in the Northern League Cup.

Silksworth had the first chance of the game, before either side could settle, with Adam Storey drawing a low save from Adam Bartlett.

Whickham quickly got a foothold in the game though and Robson was denied twice inside the opening 10 minutes of the game by the ‘keeper.

The deadlock was broken on 18 minutes, a goal that had been coming. Chad Collins dinked a cross to the back post before Cowburn’s shot found the bottom corner, despite the best efforts of Joe Clayton.

Cowburn went close with an effort on 21 minutes, but, eight minutes later, he had his, and Whickham’s, second of the game.

The Silksworth defence was dissected with a defence-splitting pass from Burrell. Cowburn latched onto the ball before striking home.

The Lang Jacks continued to create openings with ease, with Robson being denied on a couple of occasions after the half-hour mark.

Another great move from the visitors was rounded off on 41 minutes. Tom Scothern quickly passed out wide to Collins.

After taking a moment to look at his options, Collins’ cross was pushed across goal by the ‘keeper and the unmarked Burrell pounced and rifled into the roof of the net.

Robson scored a deserved goal in additional time, at the end of the first-half. Collins completed a hat-trick of assists with a delightful through ball, over the top. The young striker raced through and produced a clinical finish, beating the ‘keeper at his near post.

Whickham threatened to pick up where they left off, going into the second-half, with full-back Tom Howard gunning forward before being denied by the legs of the ‘keeper.

Substitute Ross Peareth directed a cross towards the bottom corner of the net, however, Clayton reacted well to the header and got down quickly to push the ball away.

The visitors continued to control the game, with a four-goal cushion behind them. Cowburn’s effort was pushed behind by the ‘keeper, who was then on hand to deny Kieran Galbraith, whose header was saved at point-blank range.

A long-range effort from Reece Blakey failed to trouble Bartlett in the Whickham goal. Falcus’ side added a fifth goal, on 84 minutes.

Silksworth’s free-kick was blocked on the edge of the area and the Lang Jacks broke with pace. Cowburn released Robson, whose cross came to the back post and McAndrew found the far corner of the net.

Right in the closing stages of the game, Bartlett kept Whickham’s clean-sheet in tact with two fantastic saves. The visitors progress through to the next round of the Durham Challenge Cup and will eagerly anticipate the draw.