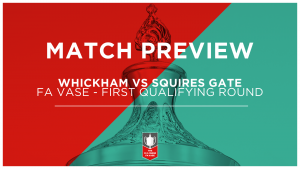 Whickham will be looking to bounce back from three consecutive defeats when they welcome Squires Gate to The First Mortgage Glebe in the Buildbase FA Vase.

The 1981 winners get their Vase campaign up-and-running this weekend when they take on the Blackpool-based outfit.

Robin Falcus’ side go in to the game off the back of a heavy defeat away to Consett, while they’re also conceded nine goals in the last three games.

In the last two seasons, the Lang Jacks have exited the competition in the First Round, with last seasons defeat coming away to Bedlington Terriers at Welfare Park.

The two sides have faced just once before, also in this competition. The previous encounter took place at School Road, where Gate won 2-1 in the 2003-04 season.

Gate started the 2019-20 campaign with four-straight defeats, but go into the game with Whickham unbeaten in their last two matches.

Assistant Manager Andrew Bulford said: “It’s going to be a tough game. I know, from past experiences, that teams from their league have knocked a few Northern League sides out.

“It’s the biggest competition that players at this level can compete in. The FA Cup is great, but you’re not going to win it.

“The FA Vase is your chance to go to Wembley and I know from my own experience that it’s the best experience of my life. People will be giving everything, we will and so will they.”

Issue 4 of our matchday programme will be on sale as you enter the ground, priced at £1.50 for 40-pages of exclusive content. 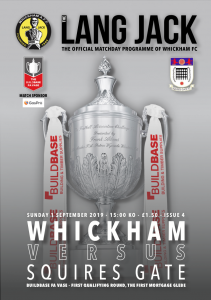 Issue 4 of The Lang Jack