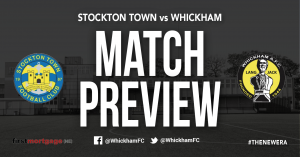 Whickham go into the match at Stockton Town full of confidence after their late heroics snatched all three points at Sunderland RCA.

The Lang Jacks were trailing 1-0 going into the final 10 minutes of the game, but goals from substitute Scott Robson and winger Lee McAndrew ensured the points would be heading back with them.

Robin Falcus’ side and the Anchors faced each other twice last season, with Stockton completing the double over Whickham in the 2018-19 season.

Town edged out 2-1 winners at The Glebe in January, while they won 4-2 in the fixture down on Teesside back in March.

Stockton have started the season just how many people expected them too, with three wins from their first four games in all competitions.

In the league though, they have won both of their games. A 6-0 victory away to Billingham Town on the opening day of the season was followed up, two weeks later, with a narrow 2-1 win away to Bishop Auckland.

Meanwhile, the Anchors made it safely through to the Preliminary Round of the Emirates FA Cup after beating Nostell 5-1 in the replay last week.

Assistant Manager Andrew Bulford said: “We’ve got a good squad now and we’ve got players that we can put into the team, where we know they’ll do well.

“The squad will have to be used. We know what a tough test Thornaby is going to be (48 hours later) and Stockton are a team that are one of the favourites to win the league.

“There’s nothing really that we can do about it, there’s no point worrying about it. That 3G pitch isn’t going to help anything, but we’ll deal with it and try to get two wins this week.”